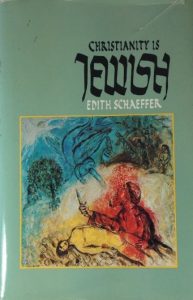 Christianity is Jewish, by the late Edith Schaeffer, is timeless, accessible, and well worth reading. The author draws you in by painting a picture of her many interactions with Jews, and of the questions they asked her. “Is this [Christianity] a new religion?” one Israeli reporter asked. On another occasion a weary Jewish father asks, “What is a Jew anyways?” Schaefer would often reply with a question of her own, namely are you looking for a superficial answer, or for the real one? The real answer, the bird’s eye view of scripture that she would walk someone through, is what makes up Christianity is Jewish.

Her survey of scripture begins where every good story should, at the beginning.   In Genesis, we are introduced to an active, personal God communicating with his creation. Schaeffer then touches upon key moments throughout the Old Testament, which point ever more clearly to the coming Messiah. From God providing a sacrifice for Abraham, to the blood of the first Passover lamb, and to the sacrificial system in Leviticus, the author connects-the-dots for her Jewish audience, showing them that the long-awaited Messiah, whom they should have recognized, is Jesus.

Shadow and type give way to reality, as the Christ celebrates the last Passover meal with his disciples, the spotless lamb offers himself sacrificially at Calvary, and the temple curtain is torn in two. “Why hasn’t someone told me this before?” asked someone patient enough to listen to all that she had to say. Connecting the dots changes everything. Faithfulness to God and to the scriptures now means embracing the unity shares with all believers in the singular church, rather than in keeping traditions that pointed towards things now fulfilled in Christ.

At this point, you might be thinking, but I’m not Jewish. What does this have to do with me? Christianity is Jewish is one of the most succinct surveys of God’s unfolding plan of redemption, that I have read. It is also a book written for gentile believers, just as much as for those coming from Judaism. For, Schaeffer was not only anxious to share the gospel with her Jewish neighbours, but was also eager for gentiles to recognize that they are a wild olive shoot grafted into a deeply rooted, and very Jewish, tree. Taking the time to see scripture through Jewish eyes helps us better understand the flow of redemptive history.  It should also stir us up to earnestly pray that the natural olive shoots, which have been torn off because of their unbelief, might, through faith in Christ, be grafted back into the people of God.

Christianity is Jewish is one of hundreds of engaging and edifying books to be found in your Church Library.