The Heart of an Executive 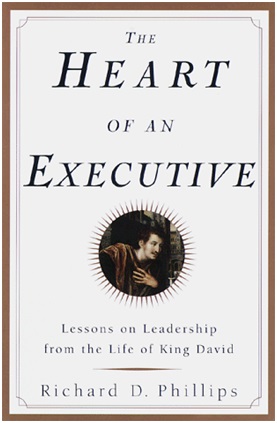 The dramatic highs and lows of David’s life make for good story telling.  Even those of us raised outside of the church were told of his underdog battle with Goliath.  In The Heart of An Executive, however, Richard Phillips takes a fresh look at these familiar biblical accounts, from the perspective of what we can learn about leadership from the life of David.

The author emphasizes David’s leadership style by first recounting the story of the people’s demand to be like the nations surrounding them, with a king to rule over them.  God punished their lack of faith by giving them what they wanted, in King Saul.  Where David introduced us to the concept of the leader as a self-sacrificing shepherd, Saul exhibited a self-serving and arrogant leadership style.  Where David was guided by a compelling vision for his people, Saul thought only of the moment.

Even more convicting, the author reminds us that “there is a Saul within each of our breasts, a Saul even within the anti-Saul David,” and so the low moments in David’s life, where he is motivated by impulse and far from being a man of prayer, are also used to teach valuable lessons about what godly leadership doesn’t look like.

At times, the parallels between the dramatic events of David’s life and the relatively mundane drama of the boardroom seem a little stretched and awkward.  However, Richard Phillips is an engaging story-teller who manages to avoid the shallowness of many other Old Testament biographies.

Who should read it?  This isn’t a book written for academics, but is an accessible quick read for anyone who in the church, in the workplace, or in the home finds themselves in a position of responsibility.