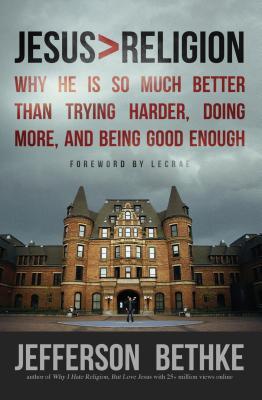 Jefferson Bethke is young, brash, and not afraid to say what’s on his mind. He grew up in the church and was a strong adherent of American Evangelical “churchianity”, but it wasn’t until he became an adult that he recognized that although he had done all the things he was expected to do, he did not set apart Christ as Lord in his heart and he was missing the one thing that all Christians need to have: Jesus.
The approach of Bethke is not a soft touch and I found that at times he was a bit heavy handed in using hyperbole to get his point across. Having said that, I doubt very much that he wrote it for someone like me. Rather he is after young people that have probably spent their entire life living in the shadow of their parents faith and have grown tired of thinking that being Christian is a list of do’s and don’ts, membership in the Republican party, lame music on Christian radio, and Hallmark made for TV movies. He uses this tactic to show that Christianity is ultimately about following Jesus and we have traded the radical commands of our Savior for the cultural mores of American Evangelicalism. Where the modern day Christians may say, “we don’t associate with those people”, we find Jesus eating and welcoming those people into his closest circle. Where modern day Christians may be excusing the moral failings (read sin) of our church friends and excoriating the sins of immoral unbelievers, we find Jesus flipping it around and ripping the religious leaders of his day while showing grace and compassion to the lowest of low. One thing that I did appreciate about the author’s work is that he does hold the mirror up to us (both the church collectively and Christians individually) but he resists the temptation to throw the baby out with the bath water. That is to say that he does not ever give license to saying the church is to be discarded or neglected. He takes the commands of Jesus too seriously and when Jesus says the church is his bride, he believes Him. He also avoids the temptation to excuse sinful behaviors that many young people would want him to excuse, but he urges us to show compassion while disagreeing with that way of life in the same way our Lord did in his ministry. Lastly, he is quite candid about his own failings and misbehavior, sharing the ways in which he lived in active disobedience while claiming to be a Christian. He shares it plainly but does not attempt to glorify it or use it to give himself street cred with his readers, only to show that he knows all too well what many have been through. In all, I would say that this book would be a good read for someone who has grown up close to the church but have grown tired of a church culture that sees the world in terms of “us and them”. It can also be an effective evangelistic tool to share with a friend who has judged Christ on the way that He has been portrayed in the media and by those critical of the church. Lastly, if you are a parent (or know of one) who has an older child that fits into either of the categories mentioned, this may be a good book to read and gain some insight to their world. Who knows, it may be a first step towards bringing someone you love closer to Jesus.